Firstly my apologies for not posting this earlier than I have. It certainly wasn't because I didn't like it - that is so far from the truth as I LOVE it! And I certainly have been doing lots of showing off in real life. So here's the big unveiling of what I received from Serena - at the moment it is hanging over a picture frame at the entrance of my bedroom doorway where everyone can see it,which is why it doesn't look quite flat here. I wish I could take a photo to do it justice - maybe some time later. 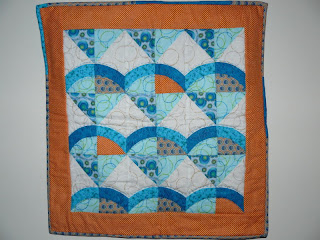 Serena called it Ocean Waves. One reason is that I had said my favourite colours were blue and green - ocean colours. The pattern she used made her think of waves rolling - and she is right. But I also see ice creams and beach balls and bubbles - all beachy things. The orange is for sunrises and sunsets - it seems she noticed on my blog that I often have sunset pictures. I would have sunrise ones too if I was up early enough. It is hand pieced so everything is beautifully curved and quilted along the top of the 'waves'. Isn't she clever? And I am so lucky! 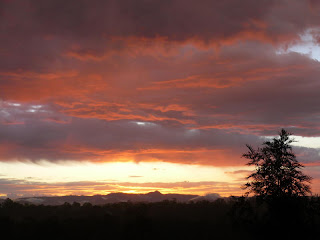 And this is my latest sunset picture - we had a big storm a few weeks back and this was what appeared after the rain had gone. (although there are still some low clouds).So no wonder Serena thought of orange - it almost looks the same colour!

And there might be some spaces left still in the second round of the Booty Swap if you are interested - I can recommend being in the fun.

I went shopping yesterday for new vacuum cleaner bags and came out of the shop with a new laptop. Now it is confirmed why I shouldn't go near the shops.

They did give me the vacuum cleaners bags for nothing - definately a good point to make to my husband.

Hopefully I can keep the use of this mostly to myself - what are my chances? Anyway a nice new portable computer certainly means that I don't have to sit next to noisy teenagers playing music.
Once I get some software and photos loaded I will be able to show you the wonderful quilt I received from the Miniature Booty Swap. It has been travelling with me in my craft bag and is pulled out and shown to all my friends. It's ready to settle down soon on the wall near my sewing machine. Photos coming soon...
Posted by bettsylyn (Lynda) at 6:23 PM 4 comments: 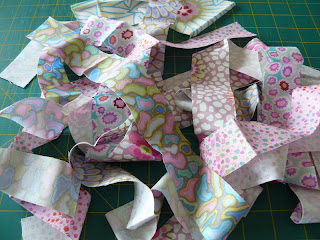 My Miniature Booty Swap Quilt has been received by its new owner, Bronwyn, who has posted some lovely photos of it on her blog. I had a lot of fun with this quilt although it really challenged me to work outside of my usual colour scheme. This quilt had a mind of its own and certainly told me which direction it wanted to take. Originally I thought it would just be the braids but I felt it needed something to break up the blended feeling a bit more. I auditioned a number of fabrics and ended up with this stripe. Interestingly if you saw the whole piece of the stripe the other part has orange flowers which just wouldn't have worked. I also considered the same stripe in a blue but it was too strong. I am very happy with the way it finished, and I felt from what I had seen on Bronwyn's blog it would suit her. ( fingers crossed) 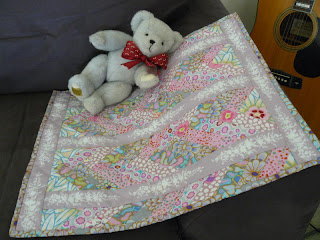 The picture below shows the quilt hanging. It is not quilt flat because it is actually hooked over a picture frame. I don't think this one shows the colours very well. 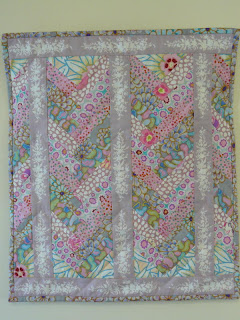 And here's a shot without the flash to show how I quilted it. I didn't feel it needed a lot. All the fabrics are Kaffe Fassett which I have never really used before, which is why it was out of my comfort zone. The quilting was done with pale pink perle #12 cotton. 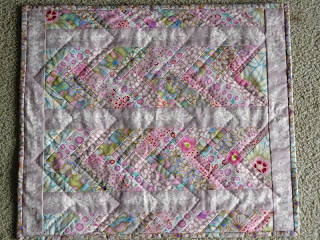 Pop on over to see Bronwyn's flattering photos and while you are there check out the wonderful little quilt she made for the swap. As it turned out three of us had a little Australian swap within this swap and Bronwyn made hers for Serena, Serena made one for me, and mine was for Bronwyn. A lovely way to make new blog friends.
My next post will show you the beautiful quilt that Serena made for me.
Thanks girls ..... and also to Toni for hosting the swap.