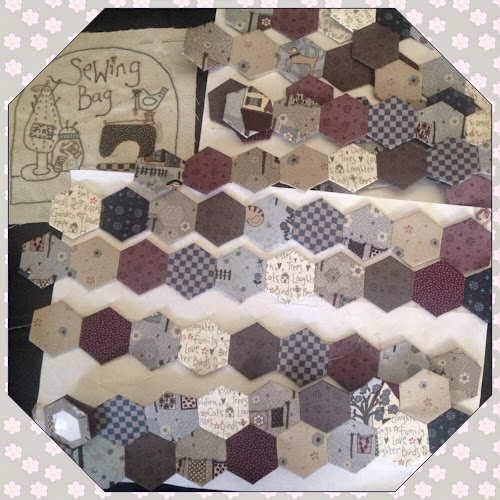 Lots of people were sewing along with Chooky for the anniversary of her chookshed. I wish I had been able to be there in person but time was spent at home working on the hexagons for the project we started at Nundle this year. I can't believe just how long they are taking.

The white paper behind is what I started using when I was setting them out. The designer of this project - Lynette Anderson - suggested using double sided sticky tape on paper to keep things in order. Not a bad idea and I did use it to start with as it did prevent the little hexis going everywhere. I bought an extra fat quarter of the dark red spot to add in for a bit of contrast which I am happy about.

The plan is to have it finished by next year when we go back to Nundle to work with Lynette again.

So Happy Anniversary to the Chookshed. We'll hopefully celebrate with you again next year.