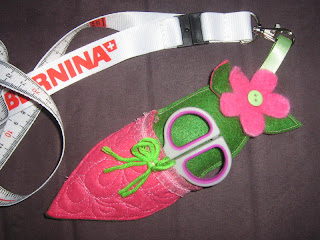 There have been a few mentions of the craft shows here in Australia. I was going to write about it earlier but my 'loot' was rather unexciting (even though I was very happy with what I bought). Another problem is that they don't allow any photographs. Now I know that people do take photos ( I saw them, especially with camera phones) but I wouldn't then risk putting them on the net. So the easiest way for me is to just not take my camera. But that makes it hard to do a show and tell.
Anyway, what I am showing is my effort from the Bernina workshop. I always try to do the Bernina workshops, because I usually pick up something interesting or get reminded of something I had forgotten. Also there is always something neat to take home. Last year it was a Bernina bag which we had worked with the BSR and done freehand embroidery on. This year we did a Scissors Fob. The flower at the top is felted and came in the kit - there just isn't enough time to try out all the techniques. The front is stitched using the BSR and the bow is sewn on using the button stitch. Now I have never sewn on a button using a sewing machine (and am probably not about to start either) so I had never though to use the stitch to sew other things on securely. So that is a new thing I learnt from this activity. And it is always nice to get ideas of how to use the machine. I have had my 440 now for over a year and I have hardly tried anything more than just straight sewing.


And it is always great to view the quilt show which is held in conjunction as well. There is just so much beautiful work out there. You can see the winner's quilts here.
Posted by bettsylyn (Lynda) at 11:15 AM 4 comments:

Just north of Brisbane, on the way to the Sunshine Coast are the Glasshouse Mountains. For those Steve Irwin fans you can find Australia Zoo in this area and in sight of these mountains. A week ago we were driving home from the Sunshine Coast and detoured to go to one of the lookouts. What I found there, embedded in the paths were these mosaics. ( There were more than these two but I liked these ones to show here.) The first two photos show the mosaic and the matching view. The large mountain is Tibrogargan ( the father), the one to the left is Ngungun which is the only one I have climbed. You can read the legend here. 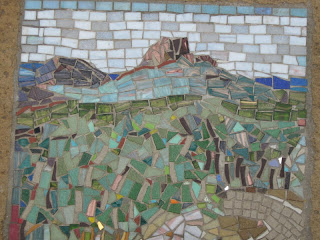 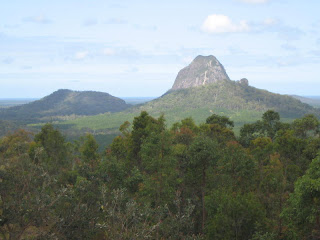 Here is a mosaic showing Coonowrin ( or crookneck) and Beerwah ( the mother). I didn't actually get a photo of Beerwah but you can see Coonowrin in the photo with Ngungun to the right. 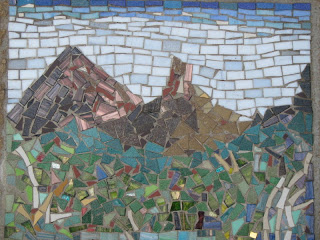 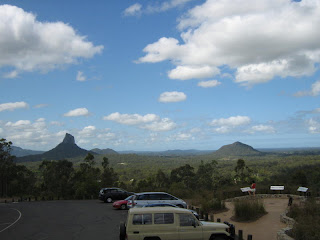 I really liked these mosaics - just embedded in the paths and some on the lookout walls. They aren't very big - maybe 12 inches (30cms) square. And it set me to thinking - maybe one day I could quilt something like this. I haven't been very adventurous previously but I saw something on an old Simply Quilts episode which prompted me to think about doing something like this. It is just an idea but I might just think about it some more. And as my husband loves going driving it wouldn't take much for me to suggest that we go back and take more photos of the mosaics.