It was early in the morning when the team started. We had to go to a meeting point and then the team had to be taken by bus to the starting point for 7 am. They were all smiles when I dropped them - I don't think that it had quite sunk in that there was still 100 kilometres to go. 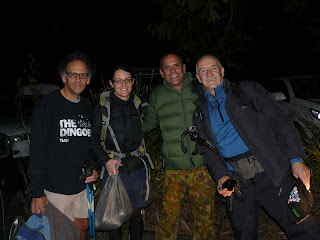 44 kilometres walked ( Third checkpoint and the first one the support crew could access) and it was time for cups of tea and food ( lamb and lentils and lasagne). Everyone's feet were starting to feel it. By this time it was late afternoon and there is still a full night of walking ahead. 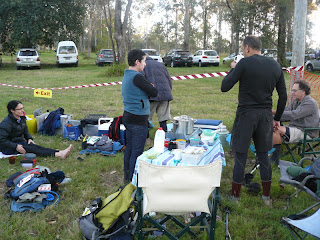 There was another big checkpoint stop later in the night where I fed them all up on porridge, and more cups of tea. The support crew ( that's my SIL and myself) had a few hours sleep and then up again to see our team come home. 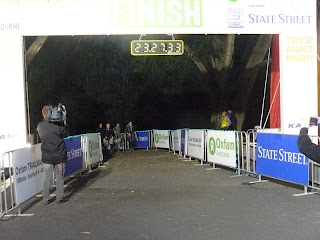 They took 23 hours and 28 minutes to complete the 100 kms and all four of them finished. They came in 44th. (out of 350 teams, although it isn't a race.)The first team were runners and actually took less than 12 hours to do the same course. Amazing ! 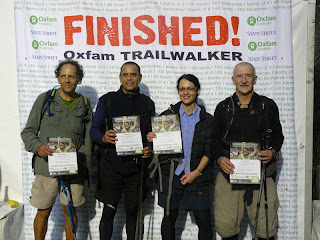 With ages ranging from 40 to 64 we are very proud of our team. A lot of teams finished with less than four but I think that everyone who participated should hold their heads up high. One million dollars was raised for Oxfam and all the volunteers and organisers should be congratulated for a great effort in putting on this event.

What I will be doing this Friday....

There has been a lot of posts about going to the Sydney Craft Show and having a blog meet up. I went last year and had a great time and had fully expected to be going again this year. Sometimes though, life doesn't quite always work out the way we hope.
So instead of going to Sydney and having a great time with friends I will be part of a two man support crew for a team doing the Oxfam trailwalker walk in Brisbane. It is a 100 km walk through bush and on fire trails to the west of Brisbane.
http://trailwalker.oxfam.org.au/brisbane

My husband Richard (left) and his brother (right) with two friends are doing the walk and are starting at 7 am tomorrow from Mt Glorious and anticipate finishing at Mt Coot-tha 24 hours or less later. My sister-in-law and I will be available during that time to be called on, also we will be at some of the checkpoints with changes of clothes and shoes along with food and anything else they need. We have to have them there to register between 4 and 4.30am so think of me in the dark and cold.
There will be work to be done in the middle of the night too so it could be a full on 24 hours for me too.
You can see their page here....
http://trailwalker.oxfam.org.au/brisbane/teams/team/?team_id=12117

These photos were taken on a training walk going up Mt. Maroon - they've done lots of preparation. 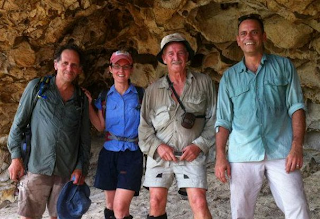 and here's my husband on the top of Mt Maroon. 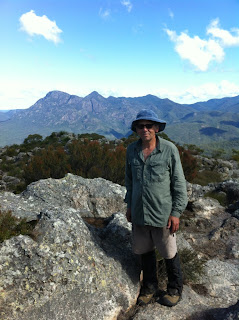 So while I dream of being in Sydney seeing and doing lots of crafty things and meeting up with bloggy friends,I can't be there.... Hope you all have fun.
Think of me out in the bush in the middle of the night waiting for my team to come in and pass though the checkpoints. Ah, the things we do....
Posted by bettsylyn (Lynda) at 6:01 PM 7 comments:

It seems some people who shall remain nameless ( in other words - me) are late in posting photos from the Brisbane Blog meet we had a week ago. We had so much fun - there was show and tell with lots of discussions and oohhs and aahhs. 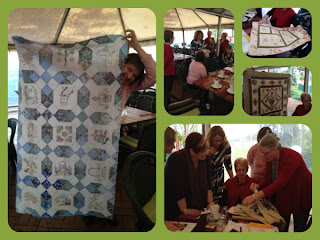 There was lunch and lots of photos - check out the lower photo - this seems to be what was happening all the time.  We all seem to get on so well., whether longer time friends or new. After all with blogging and patchwork/quilting in common it is a winning combination.  Extra special thanks to Susan for organising the lunch and also to Michelle and Mary for our special gifties. 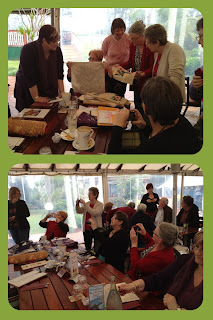 So Kayly ( my patient travelling companion),Michelle, Teresa, Helen, Marilyn, Noela, Susan, De, Mary and Fiona, can we do it again sometime please?