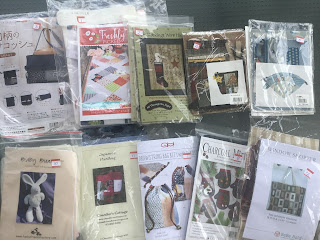 Our Sunday group of stitchers has been having a UFO thing going on for a few years now. A number is drawn every month and then we work on the item with the same number. I don’t have a lot of success because most of my UFOs are large projects and even though working towards a finish counts, it just doesn’t feel the same as actually finishing something.

So I when I was having a bit of a tidy up I started finding kits I had bought over the years but never made. This year is now going to be the year of starting and finishing kits. I have numbered them with stickers so they will still fit in with the random number idea.

I think though that I will probably find enough kits to work on for years.... 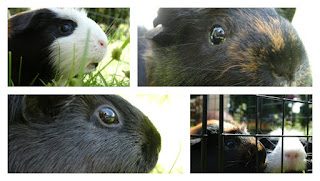 This is a test to see if I can blog from my iPad. I thought I would introduce my girls - Diamond, Topaz and Wombat. The last picture shows Topaz and Diamond trying to tell me that the grass really is greener on the other side. 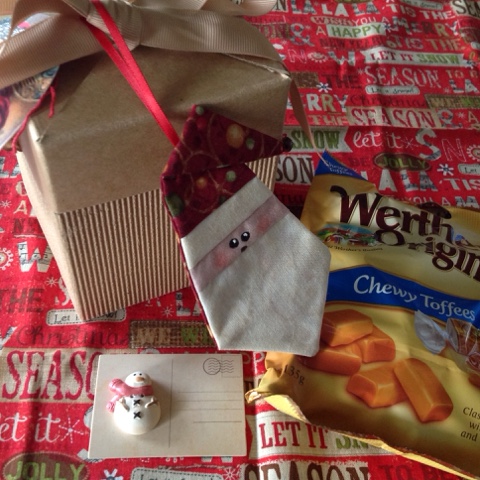 I have been taking part in a friendly little swap called the no fuss swap. The idea is to send only a few items and nothing else. This time it was the Clayton's Christmas Swap - the Christmas you have when you are not having a Christmas. We had to send a fat quarter, a decoration and a button/buttons. Oh and something yummy. Here's what I received from Teresa - everything is perfect. And because it was delivered without the help of the postman, it was beautifully contained in a very interesting box. Thank you so much Teresa.
I can't show yet what I sent my partner as I don't know if she has opened it.
Now I feel as if I am showing my age because I remember the ad for Clayton's - the drink you have when you are not having a drink. I wonder if you can still get it. Note to self - will have to check that out.
Posted by bettsylyn (Lynda) at 12:23 PM 4 comments:

My daughter likes to crochet and she has made this for her brother and it will be for his birthday which was earlier this week. ( it is a Pokemon - a Charizard I think) It is really amazing with fingernails and heaps of small details. I'll be honest I wouldn't even start such a thing. 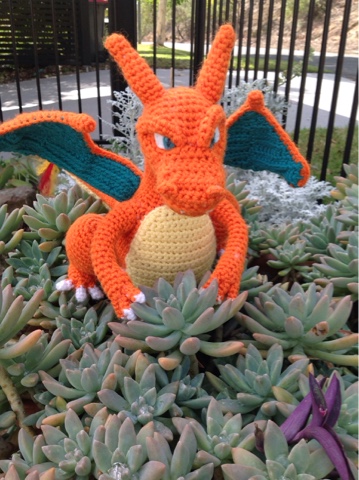 This little monkey is what she made me for my birthday - the pattern comes from here. The link doesn't go straight to the individual pattern because I wanted to link to all the lovely patterns on this site. You'll find the monkey there without any trouble. 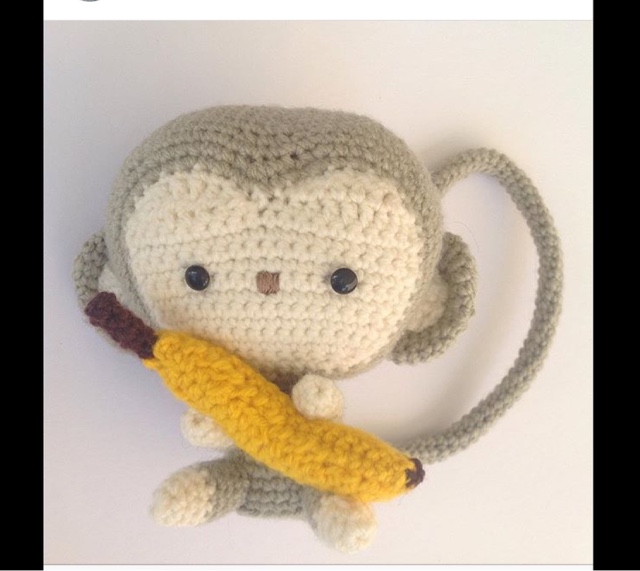 And yes, I do some crochet too. Last year there was a lovely crochet blanket pattern from here which just looked fantastic done in clear colours. This my ugly version so far. I couldn't afford to buy wool at the time so I raided my mother's stash,which was mostly variegated. I still don't know how I feel about it - my son says he likes it. It is a good project for when I take him to football training, so I'll keep going with it. 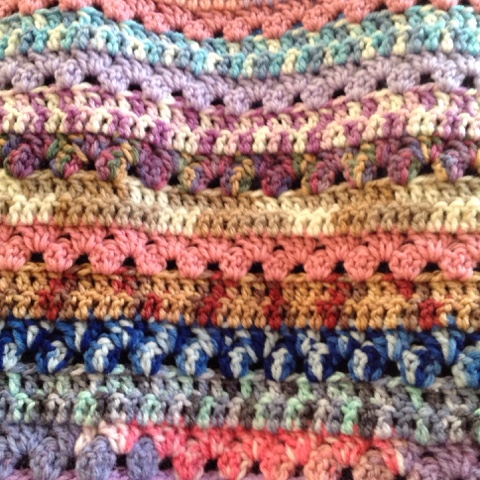 My daughter says knitting is boring but she likes making things in crochet. Maybe she was inspired by the teacher she had in Years 3 and 6, but not in the knitting area. Sorry Maria, I tried to get her interested in knitting....
Some thoughts about blogging........ Anyone who visits here will realise that I haven't blogged much. There are a few reasons but the main one is I actually don't have a computer. I only have an iPad to use and obviously while it is possible to blog from one I find it difficult. It has already taken me an hour to get this far in writing this and I never know if what I have written will post properly.
While I love the tablet the size of memory is a problem (16 G) and I am forever juggling things for space. Not having a computer means that getting the photos off is difficult. Finally my daughter managed to put them on her computer to save them, but sadly her computer is off with her where she lives on campus at University. The photo of the monkey I have used here is actually a screen shot from Instagram ( poorly edited because I have had had to delete all my photo editing apps as well).
So probably the best thing for me to do is try to do short posts when I can. Fingers crossed.

While lots of people seemed to be off on sewing weekends, I was having a different sort of weekend. My youngest boy had a weekend of sporting activity and even though I prepared some stitching to take it didn't even get opened.

On Saturday his Under 13 Rugby League team played in the Grand Final. We didn't win but this team of boys have been winners all along - with their support of each other and their great spirit. They played their best for the full time and never gave up. He's number 10 in this photo. 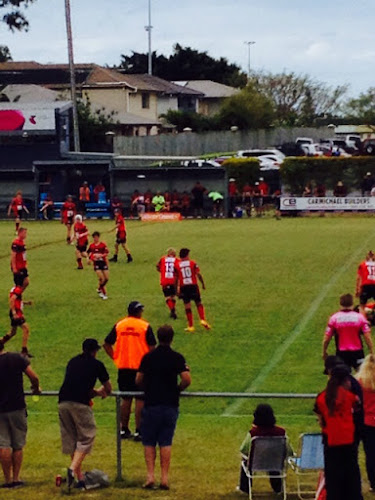 And then on Sunday we had an all day Volleyball tournament. It was an early start in the morning as we had to go to the Sunshine Coast and then it was a late night home. But the boys won all their matches and so were the winning team for Under 13 boys. Here's an action shot of my boy in flight after getting the ball over the net. I am so proud of him for his dedication.

I did manage something crafty though. On Saturday I managed to squeeze in a visit to a show put on by the Nundah Cottage Group Quilters. Afterwards I was off to our Final celebrations at the Clubhouse. It was lovely to see all the quilts and have afternoon tea which came included in the entry price. My friend Dianne had a few quilts hanging and I took this one showing her Abacus quilt ( pattern made using the Quick Curve Ruler). Dianne and I went to a class for this one a while back. Yes, hers is finished and mine, well....... 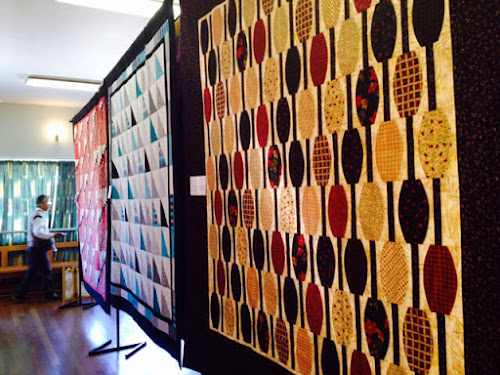 We had a rotten August with the flu - with my husband's significant '0' birthday a write off. We finally got through with the hope that September would be much better but now we all have colds - not as bad as flu but certainly enough to have lost my mojo for anything except sleeping. I am so looking forward to getting better.

I hope everyone out there is feeling full of spring bounce and not carrying the left overs of winter. Stay well.

At the end of June our Sunday Stitching group had a mini quilt swap. I received my swap from Alison who made me a beautiful little mini quilt with the teensiest of half square triangles and in my favourite colours of "blue and green and everything inbetween". These are not colours that Alison uses very much so I appreciate her effort to make something especially for me. She even provided the hanger. 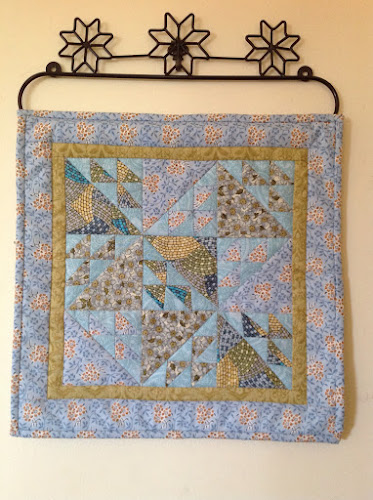 About the same time at Sunday Stitchers, De had the bright idea of offering us mini quilt frames which she and her husband would make. When I say it was a bright idea, I don't think that they realised that just about all of us would want one which made it a much bigger job than they thought.

Last Sunday's meeting saw the delivery of our frames. What a mighty effort! And I have come home and fitted my beautiful little quilt from Alison to the frame.

It's a perfect match! Doesn't it look fabulous? I can still use the other hanger if I want to change things around and hang it back on the wall, but for the moment this is staying like this. 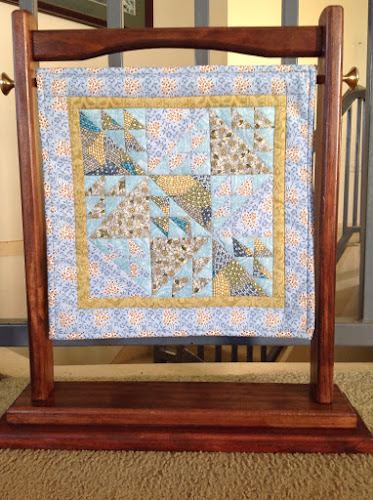 Thank you Alison and De for this lovely combination - truly a perfect match.

I'm away on a wonderful week with great friends. We go to Glenrose Patchwork in Warwick and stay in the cottages there. The weather might be on the cool side but everything else is wonderful.

It is so nice to be able to sew and not have to put the machine away afterwards. We can set up and create to our heart's content. There has been lots of sewing and laughter and some lovely food temptations.

I heard a rumour that someone was surprised that I really did sew things. Yes, I do but I am not so good at photography so I never seem to have much to show to post about. 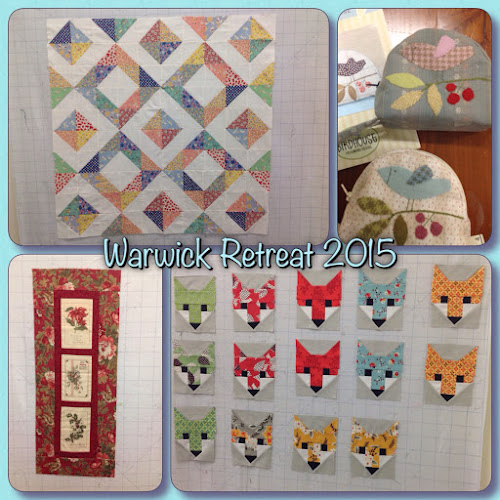 There may even be some more productivity tonight.